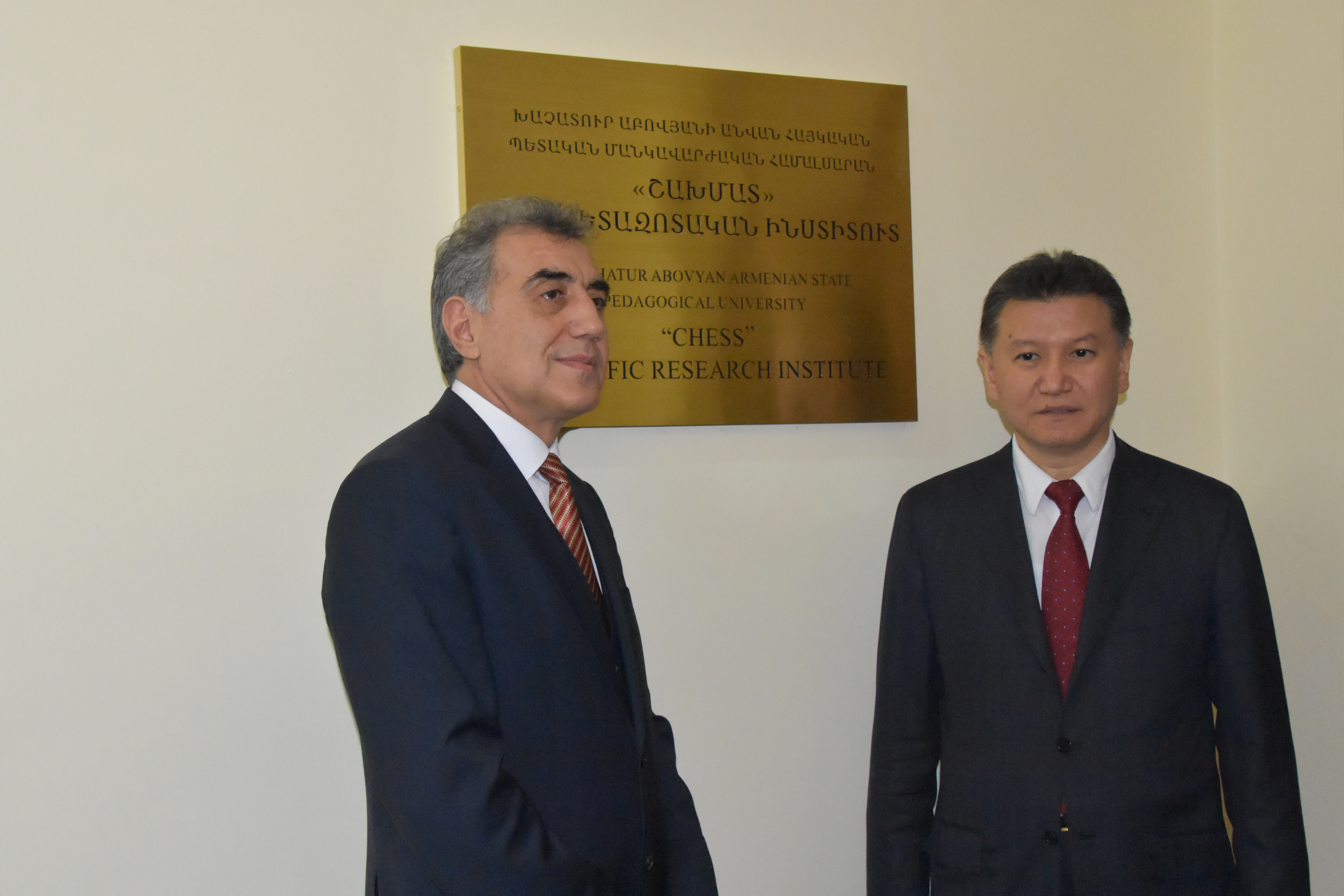 Special conditions and programs of the institute were presented to the guests. The institute is a separate structural subdivision at ASPU. Leading specialists of various fields of science are involved in this research institute and they conduct research activities concerning psychological, sociological, educational and other key issues of chess.

The Institute was founded in February 2018 by the RA Ministry of Education and Science, Kh. Abovyan Armenian State Pedagogical University and Armenian Chess Academy by the initiative of Founder-director of RA Chess Academy GM Smbat Lputian. It is unique in the world by its kind and activity. The Institute was established on December 20, 2017 by the government decision based on ASPU Chess research center and psychological science research laboratory.

“As the President of Armenian Chess Federation, I am glad and thankful that you are paying special attention to chess and are always undertaking new initiatives. It is not unexpected that our friend, President of FIDE Kirsan Ilyumzhinov is present here today; and it is absolutely not a coincidence that our experience is under the interests of other countries, and this, at least, means that we are on the right path. I want to believe that this will be continuous”, stated President Serzh Sargsyan during the visit to the newly opened “Chess” Scientific Research Institute.

The World Chess Federation (FIDE) President Kirsan Ilyumzhinov said: “I have already told to the President of RA that maybe still not everybody realizes the importance of this newly opened institute in Yerevan. In this century we have achieved probably to everything concerning to this oldest game and many people already has realized the importance of adoption of chess as a subject at school curriculum. Opening this scientific research institute, we do a step forward to the future; this is an important step in education and in pedagogical thinking development”, stated Kirsan Ilyumzhinov.

Kh. Abovyan ASPU Rector R. Mirzakhanyan expressed his gratefulness to the President of RA Serzh Sargsyan and to the Founding-director of the Chess Academy of Armenia, Chairman of Chess and Sports Department of ASPU Smbat Lputian for the establishment of the newly opened “Chess” Scientific Research Institute, mentioning that it was the best present to the university within the framework of its 95th anniversary. “When our foreign partners take interest in the scientific research activities conducted at the university and in the country, they are finding it particularly remarkable that chess is included in primary school curriculum of RA, and that it is already two years that the chess laboratory operates at the Pedagogical University”.

The FIDE President, honored ASPU Doctor Kirsan Ilyumzhinov, who was present at the celebration of the 95th anniversary of establishment of the university, considered his participation as a great honor and, on behalf of FIDE and multi-millions of chess players, he marked that the day of opening of this new “Chess” Scientific Research Institute is historical.