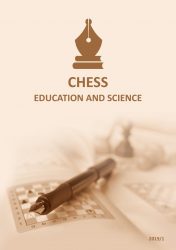 The world changes are rapid in all the spheres including education as mainly we confront with new challenges which are conditioning the direction to which we should move on and which way will be in compliance with the time.

Having many years’ experience in this field, I am sure that the chess is an important tool for public development because first of all it supports to the targeted formation of thinking, creativity, and honesty abilities of a citizen.

In 21st century the development of high technologies creates some problems of children’s self-thinking development. The RA is the first country in the world where the chess was included at school program as a mandatory subject. That is why we have initiated and organized the “Chess” Scientific Research Institute which will research and explore all the educational, social and cultural values which are expressed during the children general development process.

We have also decided to found “Chess: Science and Education” magazine where we will publish the articles of both the institute researchers’, chess instructors and specialists who research methodological, psychological and social problems of the chess subject. This will promote to spreading out the chess experience and introduction of that subject in other countries school curriculum.

The magazine is bilingual, in Armenian and English, so far we plan to have 3-4 issues per year. We also hope to publish also foreign authors, so we invite interested parties from other countries to cooperate.

We wish good luck to our magazine.