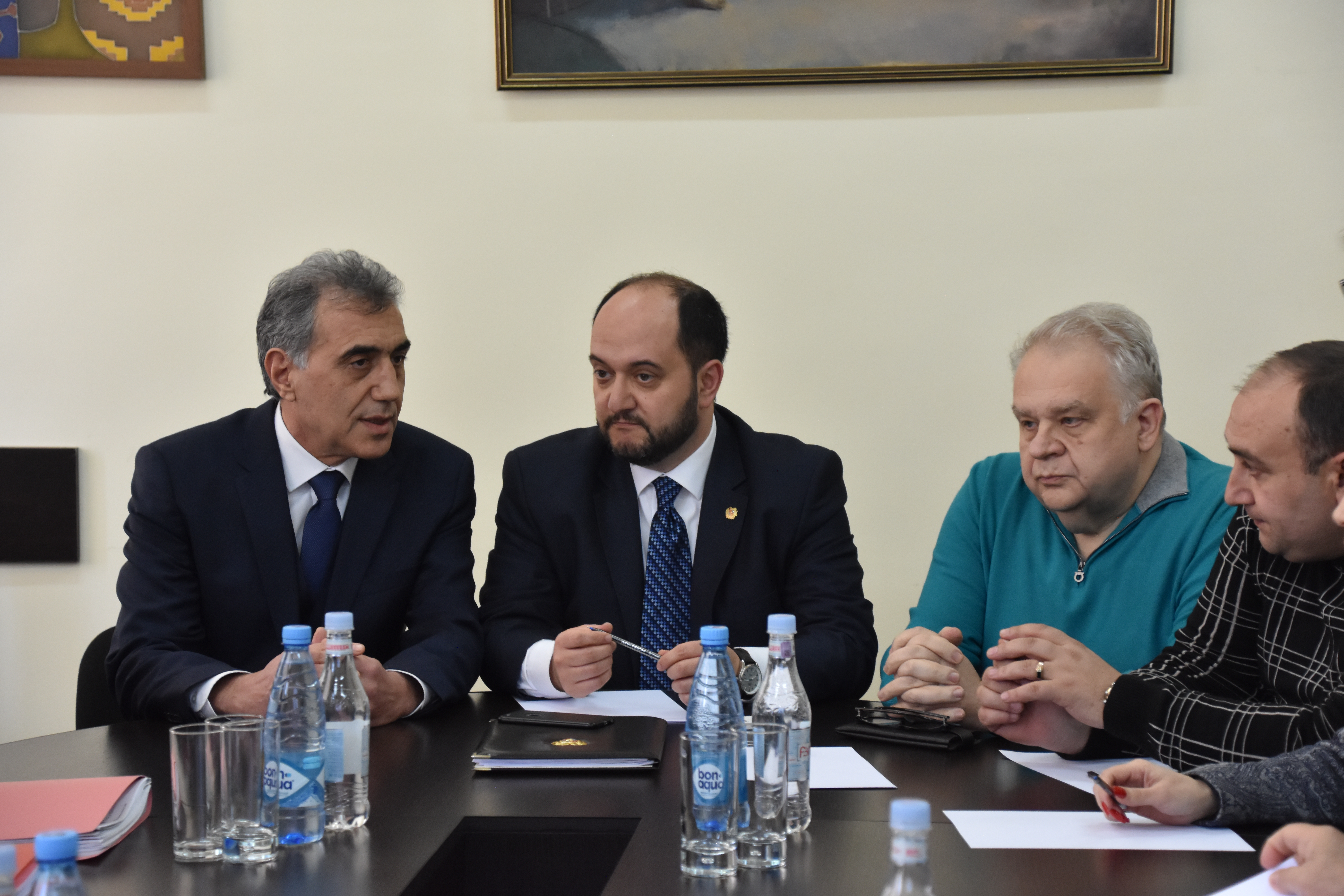 “Chess” Scientific Research Institute hosted Minister of Education and Science of RA Arayik Harutyunyan. ASPU rector Ruben Mirzakhanyan, vice-rectors Srbuhi Gevorgyan and  Mher Meil-Bakhshyan, director of  “Chess” Scientific Institute Smbat Lputyan, participant of  “Chess in School” project Ruben Aghuzumtsyan, AGBU director Hasmik Khalapyan and the whole staff of “Chess” Scientific Research Institute were present during the meeting.  The Minister was presented with the activities implemented since 2011. Ruben Aghuzumtsyan presented that the goal of the chess in school program was to train not a chess player, but to develop a group of useful abilities by the help of chess. He also noted that a positive impact was noticed in progress of schoolchildren  who had  studied chess in school.

He also presented what kind of works have been done during the preparation of chess teachers, manuals and other materials were published for methodological assistance of chess teachers. Teachers have been trained  not only in chess, but also in pedagogy and psychology spheres.

Chess education has identified some difficulties in the inclusive education system. However, the observations of researchers have shown that chess is beneficial for the development of capacities of schoolchildren with disabilities at different levels of development.

Representative of the sociological group Kristine Tanajyan presented the research carried out in parents’ community. It was noted that majority of  parents support teaching chess, but they face some difficulties; they can not help their child because they do not know chess and so on.

The minister was interested in what recommendations parents have in the context of teaching chess subjects.

The results of the research and ongoing observations of the specialists of the institute  have shown that children’s discipline has improved during the teaching of chess subjects.

ASPU vice-rector Srbuhi Gevorgyan mentioned that the articles of the ASPU “Chess” Scientific Research Institute were published in a number of internationally-recognized magazines.

Expert Serob Khachatryan mentioned that chess is one of the unique achievements that makes Armenia a leader in this field. He mentioned that we should have areas in education  where we will have a leading position.

Tamara Sargsyan presented the discussion of training  materials used for schoolchildren assessment which increases the teaching effectiveness in schools.

Dean of Faculty of Primary Education of ASPU  Heghine Khachatryan presented the peculiarities of the elementary school which causes  teaching difficulties.

As a result of this exciting and diverse discussion, it became clear that the first challenge of chess teaching is a demand of highly qualified teachers. The rest of problems arise from the competences of the teachers and, therefore, training courses are regularly organized.

Minister Arayik Harutyunyan mentioned that he hopes that all these problems will be solved in a short period of time.